Dairy Queen has a variety of specials promotions and deals each month! Dairy Queen is popular for their ice cream and dessert menu, but they also have fast food such a cheeseburgers and chicken sandwiches. Their most popular item is probably the DQ Blizzard, which is flavored soft serve ice cream paired with your favorite toppings. They have a Dairy Queen Blizzard of the Month promotion where each month they feature a different Blizzard at a special price. In addition to the Blizzard of the Month they also have a Blizzard Cake of the Month promotion which puts one of their delicious cakes at a promotional price. The choices for their Blizzard and Blizzard Cake of the Month are usually based upon the season and make references to holidays such as Thanksgiving or Christmas.

Dairy Queen also has meal deals for their fast food. They’ve adopted the meal deal promotion just like Burger King, McDonald’s, Wendy’s and other fast food restaurants have. At Dairy Queen they have two options. The $5 Buck Lunch and the $6 Buck Lunch. Eat of these features an entree, fries, small sundae and a 21 ounce soft drink. The $6 Buck Lunch features a more premium entree item. For only $1 with each promotional meal deal you can upgrade your small sundae to a small DQ Blizzard! Check out the specifics on each Dairy Queen meal deal below!

Dairy Queen Blizzard of the Month 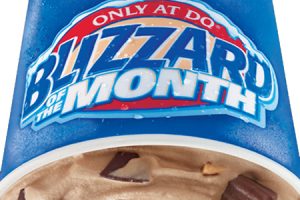