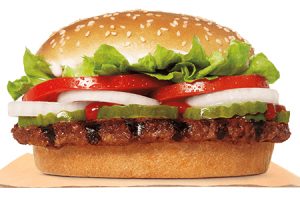 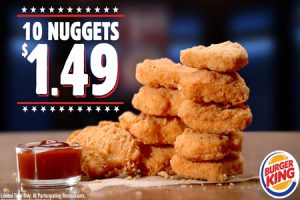 Burger King joined other fast food restaurants such as Wendy’s and McDonald’s with their different meal deals featuring a choice of items for a specific dollar amount. Right now they even have a 2 for $10 Whopper meal deal where you get 2 Whopper meal’s for only $10! Their 2 for 5 promotion and 5 for 4 deal have been their most popular and featured great options to get a fulfilling meal.

Burger King lets you get two great main entrees for only $5 as part of their 2 for 5 promotion. This Burger King special doesn’t include any sides or a drink, but it will certainly fill you up! Check with your local Burger King restaurant to make sure that the options are available and that they’re participating in this promotion. You can check out the variety of choices part of this deal below.

Just like many other fast food restaurants these days, Burger King also has their own bundle deal. The Burger King 5 for 4 gives you 5 items for only $4! You get your choice of sandwich which will be paired with 3 sides and a drink.

Here are the 4 different sandwiches that you can choose from to include in your meal:

And here are the 3 sides and the drink that are included with each meal:

That’s quite a bit of food for only $4! Plus it is also a great variety of food and not a bunch of similar items. Check with your local Burger King restaurant to see if this deal is currently offered by them!

Burger King is a classic staple of American fast food. It was founded in 1953 in Jacksonville, Florida and was originally known as Insta-Burger King. The name was changed to “Burger King” in 1959 when the company was bought out by two franchise owners. These franchise owners expanded Burger King to almost 300 different locations within the US. In 1967 they decided to sell it to the Pillsbury Company. Multiple efforts at restructuring the company was done by Pillsbury, but they never were able to reach the success that they had wanted and sold the company in 1989 to Grand Metropolitan. Grand Metropolitan merged with Guinness in 1997 to form the holding company Diageo. Growth didn’t happen as quickly as hoped and the company was put up for sale in 2000. The company was then purchased by a group of investment firms who took the company public in 2006. The changes instituted by the new owners proved to be a positive change and profits were being made. The financial crisis hurt the company to the point that the new investors decided to move on and sold the chain to 3G Capital. The company was then removed from the NYSE and is no longer public. 3G Capital is the current owner of Burger King.

Their menu has consisted of burgers, french fries, sodas and milkshakes for as long as they’ve been in business. Their signature product is the “Whopper” which was introduced in 1957. They also have a breakfast menu in the mornings. International Burger King locations feature localized food choices and options. At this point in time their restaurants are mostly owned by franchisees with 99.5% of their stores being privately owned. Some locations have playgrounds and games for children and they have often had product tie-ins to their kids meals. These promotions have featured toys from movies such as Aladdin, The Lion King, Toy Story and Pokemon.