Jack in The Box Specials

Jack In The Box Deals

Jack in The Box has capitalized on their obviously larger stoner market and has introduced many late night meals to fulfill your munchie needs. They’ve realized their market so well, they’ve even called their great promotion Munchie Meals. You get a drink, two tacos, a mixture of french fries and curly fries, and your main entree! These are available all throughout the day but at around 9 PM at most locations they are a little be cheaper. Jack in the Box is always coming up with great new sales and deals for their customers. They’ve also got a Happy Hour deal and savings on their breakfast foods.

Jack In The Box Munchie Meals

Jack in the Box has always had a college like humor in their advertising and that is certainly displayed with their Munchie Meal promotion. A Munchie Meal consists of a main sandwich or entree, two tacos, a mixture of regular and curly fries, and a medium drink. This is targeted towards the late night, student type of crowd and usually has a special price past 9 PM, though it is available all day long. No Jack in the Box coupons are needed for this deal. If you’re a fan of one type of the fries, you can ask for them to be all regular fries or curly fries.

There are currently 4 types of main sandwich for the Munchie Meal. These aren’t your regular burgers or sandwiches and they are a bit outside of the box (ha, get it?). The 4 current burgers and sandwiches available are the Siracha Curly Fry Burger, the Spicy Nacho Chicken Sandwich, the Stacked Grilled Cheese Burger, and the Chick-N-Tater Melt. These are all a tasty option after a long night of partying or being locked to the couch playing video games. 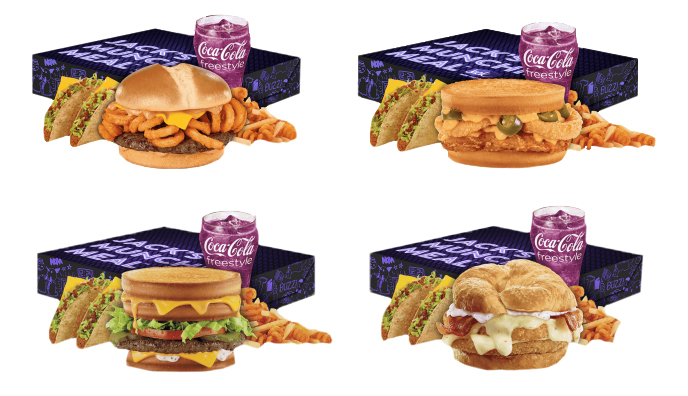 Jack in the Box has joined most other major fast food locations by offering a meal deal promotion outside of their Munchie Meals. This Jack in the Box special includes a Jr. Jumbo Jack, fries, 2 tacos and a drink! It’s quite the bargain and will certainly fill you up. Jack in the Box has so many great value menu items that you can’t help but think that they’ll add more options to their 4 for $4 offering soon. Maybe a chicken sandwich instead of the Jr. Jumbo Jack. Other possible future options include the Jr. Bacon Cheeseburger and double cheeseburger. 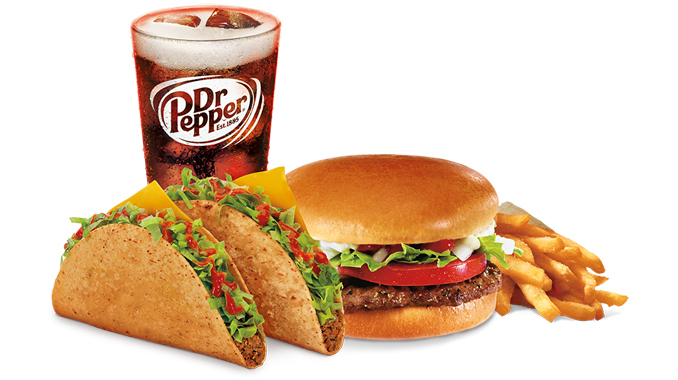 Jack In The Box History

Jack In The Box is a staple on the West Coast of the US though they do have stores on the East Coast as well. They were founded in 1951 in San Diego where they are still headquartered. Jack In The Box was a pioneer of the drive-through implementing the intercom and focusing on faster service which helped them rise in popularity. The original founder, Robert Oscar Peterson, sold the company to Ralston Purina Company in 1968. They then started to franchise locations and their business model and growth started to heavily resemble McDonald’s and Burger King. They didn’t get the same national growth as either of those companies as their East Coast expansion was a failure. During the 80s they decided that they would go after a target market other than families and decided to market towards more sophisticated customers. This didn’t work well either and they returned to the drawing board. They ultimately found success by widening their menu to include items most other fast food restaurants didn’t carry such as salads and curly fries. They actually renamed the company at one point to “Monterey Jack’s” which was probably their biggest failure. It was back to “Jack In The Box” within the year.

Jack In The Box is widely known for it’s advertising. They’ve gone with risque ads and heavily comedic ads. Lately they’ve had commercials and promotions catering towards stoners and late night drunk food. Jack In The Box is usually open late with many choosing to stay open 24 hours a day. This means they’re always available and are a popular choice after a night out at the bar drinking with friends. Their Jack character has been one of the most successful advertising campaigns having spanned across multiple decades. They created the Jack antenna ball which they gave out as a promotional item and could be seen on cars all over the road. Tacos are their most popular food item, largely in part because you get 2 of them for as low as a dollar. They have a cult-like following and are a staple for stoners. They doubled down on their marketing towards stoners with their introduction of the Munchie Meal promotion which offered a main entree, 2 tacos, a mixture of curly fries and regular fries and a drink.