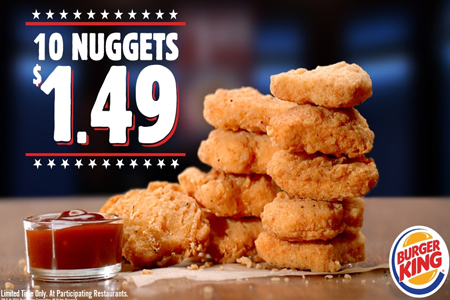 Did you know that you can now order Burger King to be delivered right to your work or home? Burger King has teamed up with Grub Hub to provide and easy an inexpensive way to get a Whopper delivered. If you haven’t tried out Grub Hub yet, sign-up here and order some delicious Burger King for your next meal!

One of the best fast food deals you can find right now is Burger King’s 10 piece Nuggets for $1.49! These bite-sized white meat Chicken Nuggets are great for dipping in sauces such as ketchup, buffalo or range. The low price of the deal makes it a no-brainer, especially when it’s a 10 piece!

The $6 King Box is one heck-of-a-deal and gets you an entire meal for only $6! Included in that price is your choice of a Whooper, Crispy Chicken, Spicy Crispy Chicken or 3 Piece Crispy Chicken Tenders and then you add fries, a drink and even cookies for dessert!

Burger King also have some new menu items for you to try out! The Grilled Chicken Sandwich features honey mustard sauce. The Double Croissan’Wich features double the meat that you’re used to with your Croissan’Which. The festival and fair favorite Funnel Cake Fries have also been introduced. A new shake offering at Burger King is their new M&M’s shake featuring great tasting vanilla soft servce ice cream with M&M’s chocolate candies. The Cheesy Bacon Crispy Chicke is absolutely stacked with bacon as well as their classic Crispy Chicken – it’s also available in Spicy! The very popular Cini Minis also have made a comeback to the menu and you get 4 of them with each order. 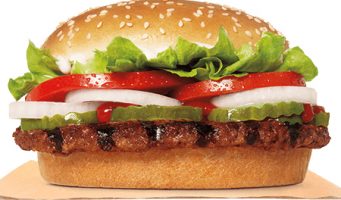 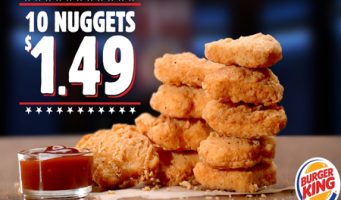